From the mysterious Celtic Coast, Progressive Rock singer-songwriter Kim Andrews is turning up the volume. Fans describe her music as early Black Sabbath and Dio with hints of Nightwish with Rockin’ good guitars.

Her singing actually sounds like the Queen of Dragons.

Love her singing a Lot."

In a needle in the haystack, Rock Genre Kim Andrews stands out with her twist of Celtic Progressive Rock/Metal and also her powerful vocal with higher operatic octave harmonies.

Kim’s new release on 1 July 2022 named the “Flame of the Fire” takes you on a courageous journey of coming through darkness into the light, rising like a phoenix. The lyrics describe ancient scenes from an epic fantasy film of overcoming obstacles, describing the feelings of love and loss.

With light and shade throughout the song starting with the thunder roaring and the rain storming down, a haunting melody cutting through the darkness in a tone of Arabic world music (Middle Eastern music) then mixed with higher operatic harmonies throughout the song.

Kim first plays the guitar in a clean sound with a dark alto tone to her voice. The riff guitars kick in with a heavy metal vibe and the verse goes an octave higher, entering the chorus and extending to a heavy guitar solo and added harmony guitars. So Kim used all guitar based in this one compared to Dragon Roams were there are violins and viola with the metal guitar featuring Matt Starr’s drums (Ace Frehley, Mr. Big).

“It took me a while to get the lyric video finished for the Flame of the Fire because of technical issues, but I’m pleased with the result. I think it goes well with the theme of the song and I just love our Celtic Coastline and the history of the Dunluce Castle,” explains Kim

Not a lot of music artists would create their own art, as it can be a long process and she does all of this during caring duties for her family. Kim completed pastel art of Dunluce Castle with fantasy elements which will be revealed on the release date.

“I love to draw since I was really young and I still do so for fun as well, it’s great to see the final result. I would let the finished piece sit for a while and then see what I can add to it to make it even better. Sometimes that takes time because not all of your ideas come to you at once,” Kim said 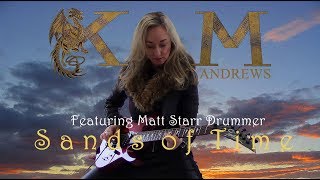 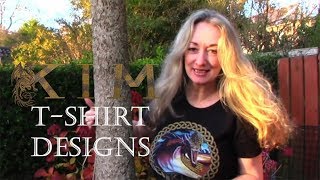 Thank you for being you 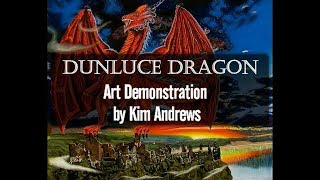 Sands of Time with The Rock Monster Show Interview

When the World Falls Apart (Downloadable)

The Fire in Music